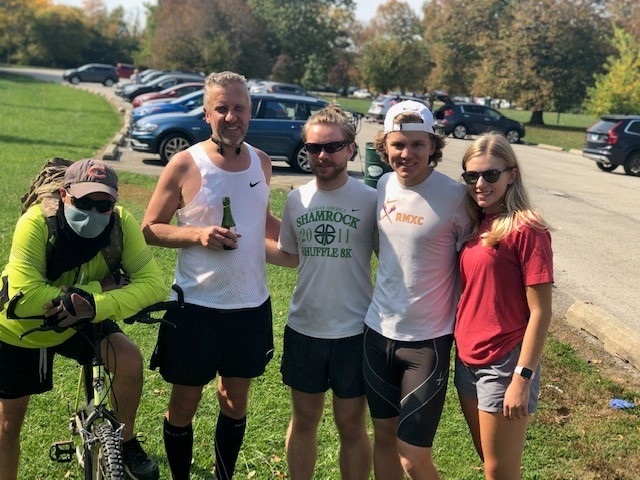 It's a Marathon, not a Sprint.

When I was in high school, I ran on the cross country team.  After a long practice run, I would consider how challenging it must be to run the 26.2 miles that comprise full marathon. I made it a life's goal to someday run a marathon myself.

Earlier this year before COVID-19 hit, I turned 50 years old and realized I wasn't getting any younger. If I were to run a marathon in my lifetime that I promised myself at age 16, this was as good a time as any to get it done. I enrolled as a charity runner for the Alzheimer's Association as part of their ALZ Stars team running in the 2020 Chicago Marathon.  I began my training program in early March.

By mid-July, when the Chicago Marathon was officially cancelled, I had already logged over 500 training miles. Since I was well into the training program (and to be honest, there wasn't much else to do while safely socially distancing), I decided I was going to continue with my training and move forward running the Chicago marathon virtually by myself.

In preparation for the big day, I was putting in weekly training runs of 18-, 19-, and 20-miles.  I felt confident that I had adequately prepared for what lay ahead of me. My family made plans to be my cheering squad along the route, and my two sons, Colin and Royce who each had run a marathon themselves agreed to run with me for a portion of my race on the race day. I had set aside plenty of water, snacks along the way, and carbohydrate loaded the night before.  I could visualize myself confidently completing the race with my family and friends cheering me on.

October 11th was a cool and clear day with light breezes--perfect weather for running a marathon.  I started out on my mapped route at 8:00 AM with a 7 mile stretch north along the Des Plaines River Trail, where I turned around and headed back those same 7 miles to my starting point.  I was finished with my first half of the marathon in a pace that was about 10 minutes ahead of my target schedule.  14 miles down, and I was greeted by family, friends and dog where I began my trek.  I stopped for a banana and some more to drink, thanking my supporters for their backing.

I hit the trail headed South again and felt pretty good about how things were unfolding.  Around mile 20 is where most marathoners say they hit “the Wall”.  By mile 21, I found myself needing to walk about 200 meters after every half mile or so.  I somewhat expected that to be the case.

By mile 23, the cramps started to hit.  First my hamstring, then my groin, then my calf, then my hip.  I could not open up my stride without a new cramp shutting me down.  Cramps are the top reason first time marathoners drop out of a race.  Somehow, I was able to walk without the cramping taking over so I walked miles 23, 24, 25 and the first half of 26.  Mentally, I was ready but physically, I realized I had not replenished the salts, electrolytes and fluids lost earlier in the morning.

I downed another bottle of sports drink and took a salt tablet.  By the time I reached the point where I had a half mile to go, I found myself able to shuffle-jog the last bit with my daughter Rosie jogging along beside me. My goal had been a four hour marathon, and I crossed the “finish line” at 26.2 miles at 12:56 pm with a finishing time of 4:56—nearly an hour off my target.

Marathons are a good metaphor for our lives. We can plan as much as we think is necessary, but undoubtedly things that are unexpected turn crop up.  Without having a plan or putting the work in, the chance of success in life decreases significantly.  When the unexpected does happen, how will you face it?  Do you push through, or want to quit?

When working with a financial planner, they should be hoping for the best, but planning for the worst.  Know that sometimes the unexpected happens.  Don’t panic.  Lean on your supporters.  Having put in the work, taken steps to mitigate potential risks and set yourself up for success will allow you to enjoy the experience more.

As for me, I’ve learned and grown from the experience and look forward to trying again next year—hopefully surrounded by other marathoners as I try to run the full race and finish with a time under my 4:00 goal.